A Brief History of the OK

In 1957 Axel Dangaard Olsen of Seattle, U.S.A. [and Denmark], asked the Danish yacht designer Knud Olsen to prepare drawings for a light and fast single-handed sailing dinghy based on conventional plywood construction.
The resulting design was named the O.K., using Knud Olsen’s initials in reverse (I guess KO would have sent the wrong message).

The O.K. was intended as a preparation class for the Olympic Finn and it has followed its technical evolution ever since. Sometimes the OK even sets new standards in singlehanders.

In the beginning, the OK was somerthing like a revolution, some national authorities tried to prohibit the OK, because it was ‘not sailable’, but after a while it became clear, that it was the sailor not good enough for the OK and not vice versa.

OKs are built in plywood, G.R.P and composite construction and all forms enjoy equal racing success.
Freedom of choice in hull construction is replicated in choice of rig, with choice of mast, sail and fitting entirely open. Consequently, every OK develops to suit the owner’s style of sailing, while the shape of the hull is designed by a comprehensive set of rules ensuring a long competitive life span. Old boats often only need a rig up-date and minor constructional modifications to make them competitive, provided they meet modern buoyancy requirements.

In the 60s and 70s, the OK class enjoyed a explosive success, with the total number of boats exceeding 10.000 and large racing fleets building up. In the 80s, the success of the popular one-design single-handed Laser affected the success of OK. In the eastern countries, the OK was the official youth single hander and after the breakdown of the socialist system, many ‘old’ sailors came back to the class of their youth, now with their own boats instead of club-owned.

Today, we are seeing a remarkable revival of the OK class. Lots of older boats are being restored and updated, new boats are being built and participation in club races is on the rise.  The OK was elected as single hander for the Asian Games 1998.

This strong come-back can be contributed to the unique characteristics of the International OK-Dinghy:
a light, responsive sailing dinghy that may be raced in fair and equal competition all over the world, without getting into cut-throat Olympic competition, and with the freedom to appeal to the individual that is in each of us. There have also been a few quasi professional business people intimately involved, developing and executing ambitious marketing plans, virtually bootstrapping the class into the future .

Carbon masts are introduced to the class in 2003.  The class actively uses the racing feedback to adjust hull dimensions for a custom fit to each sailor, like a bespoke suit.

Based on a strong history, the International OK class is facing a bright future. 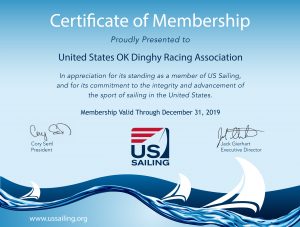